Look who came to visit yesterday morning. Someone must have told him fleas are on the menu. 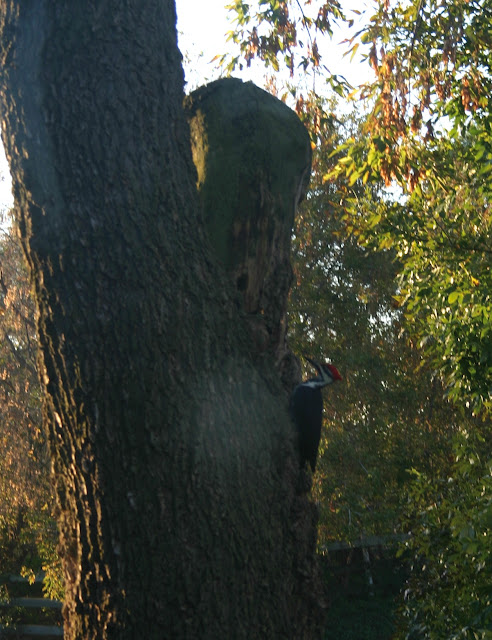 I have seen a Pileated Woodpecker only a handful of times in my life and all of those sightings have been since I have lived in this house. It is hard to realize how large they are from the photo, but they are big. I took the photo through the window and when I tried to sneak outside, off he went!

I am hopeful my flea control marathon is over. I fogged once more yesterday, as well as applied Frontline to the dogs and cat. I learned a hard lesson about the less expensive topical control products. They do not work. Had I spent the money in the beginning I likely would have saved myself a lot of effort and cash in the end. Of course, Woody could have come for breakfast a couple of weeks ago.

If I have indeed conquered the flea, I will be back online on a regular basis. Fall is in the air, lots of projects need doing, but after the past week, I think I can do my daily work and talk to my blogging friends. Whodda thought I had it in me. ☼

A busy morning ahead. The farrier as well as the equine dentist will be here. Ever see money fly? It will be today on the farm! But these guys are an important part of the horse care equation. So with a tentative smile on my face, I will greet the first (hopefully) flea-free day in a couple of weeks and get to it.

I hope your day is a good one.

Taken To Her Bed 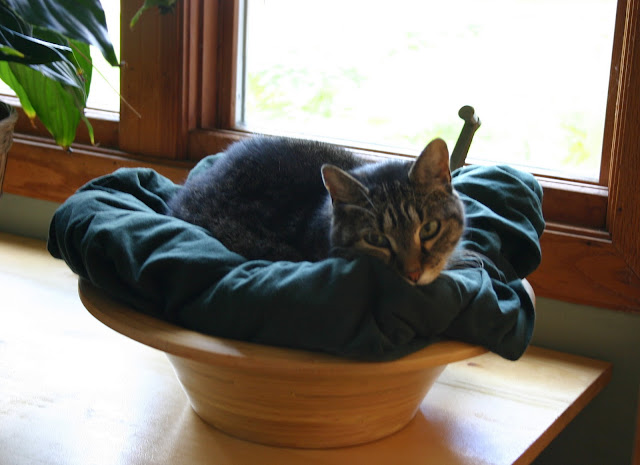 Report From The Battleground

Would you know? Could you tell?
This tranquil little craftsman style bungalow in rural Minnesota has been the site of an epic battle of man (or in this case, woman) versus invasive insect. 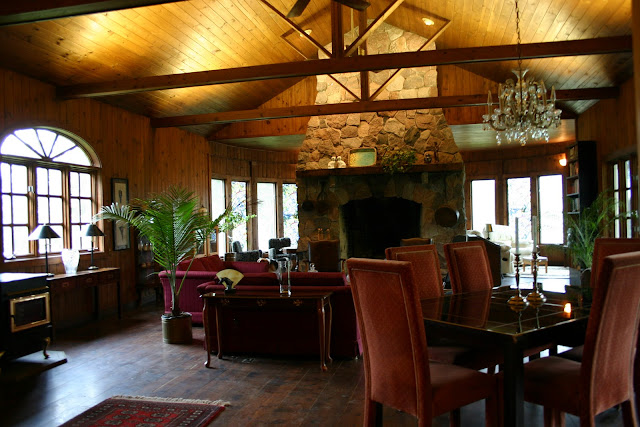 And here is one of the collaborating beasts. Yes my friends, we had fleas. 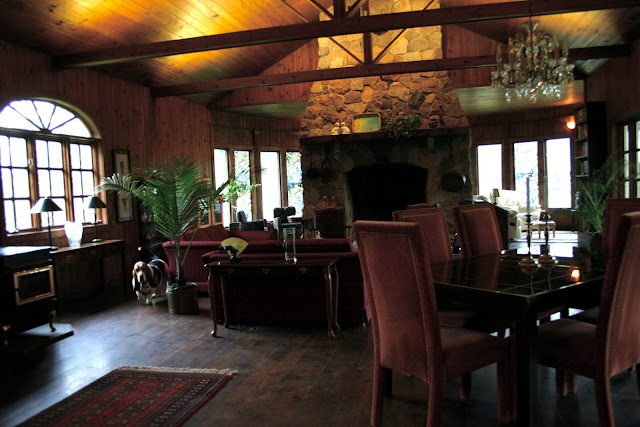 The past two weeks have consumed my every waking hour, as well as many when I should have been peacefully sleeping. I have had house pets all of my life, as a child as well as my entire adult life. Therefore, I have had, on occasion, fleas. I have never had an infestation, even when I lived in that bug haven, Atlanta.

I have been led to the conclusion that these nasty bits of pestilence are becoming immune to the chemicals commonly used to curb their prolific breeding ways. I could not get rid of them, which allowed those busy females to lay their twenty-five eggs per day. Yes indeed, I know how many eggs a female flea lays in a day. I know how long it takes for the eggs to hatch and the larvae to mature into a flea. I know more about fleas than I care to.

In the end, I have gained the upper hand by steam cleaning every surface in the house, meticulous vacuuming, fogging, constant washing of bedding and clothing. Twice daily showers and frequent bathing of dogs and poor Margaret the Cat. Thrice daily combing with a flea comb and using flea collars. Spot on treatment did not work. Manual labor has been my only choice and eventual salvation from the virulent bloodsucking vermin.

So my friends, this is why I have been absent. I am still in the midst of this, I have my office left to steam clean, I'm still capturing a few eggs and immature fleas in the comb and I plan to fog one more time. But I feel I am just about able to plant my flag of victory.

I fought the flea. I believe I have won. Now to have a long talk with Howard and Grace about sticking their noses into places they do not belong.
Posted by Sandra at 11:30 AM 12 comments:

Can you tell we are having Fall weather. Food is once again on my mind. 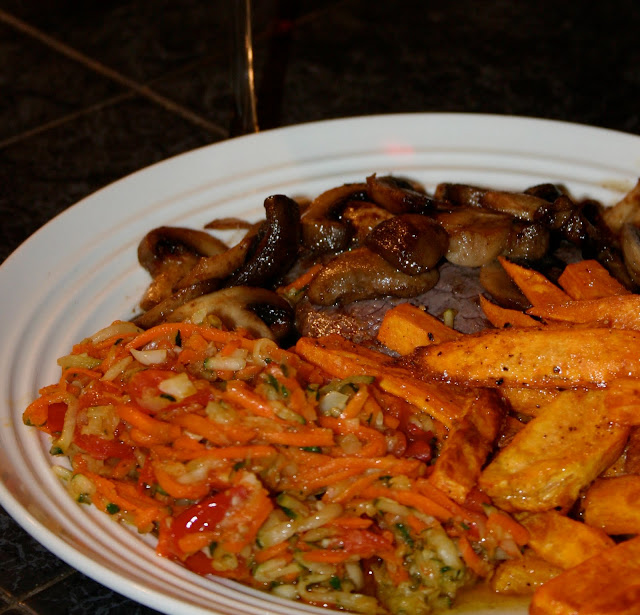 A little bit of grass fed top round steak covered with sauteed mushrooms. As Julia Child said, I did not crowd the mushrooms! Accompanied by a melange of vegetables and baked sweet potato fries. Ummm, ummm GOOD! 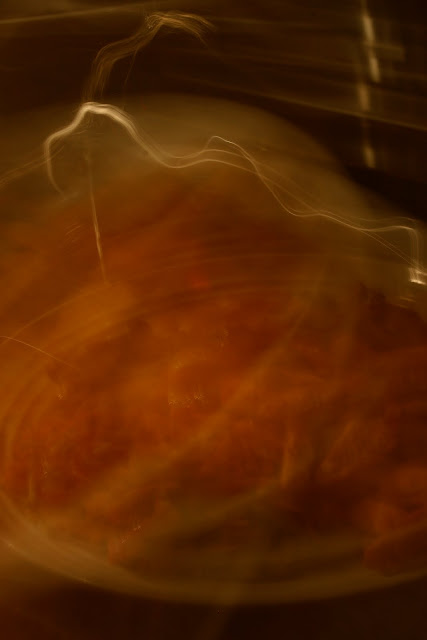 Do you think I have ghosts? Sometimes what comes out of my camera causes me to wonder!

It is another beautiful day that will be filled with work. Somehow I don't mind laboring when it is a lovely day. Anyone wanting to share the day and the labor, well I do have a fine collection of manure forks.........
Posted by Sandra at 8:02 AM 8 comments:

This is what happens when your computer has a camera. 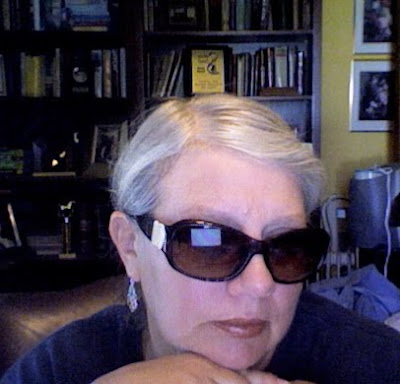 Someone decides to try out the Jackie O look. Or perhaps it's Helen Gurley Brown. I don't think either of those stylish women would have been been caught on a bet in my oh-so-not-stylish barn tee shirt!

I went to a training clinic on Friday that is a western discipline, reining. I planned to take my temperamental Lipizzan/Arabian gelding along, but he thought not and wouldn't get himself into the trailer. As it turned out, he was much wiser than I. 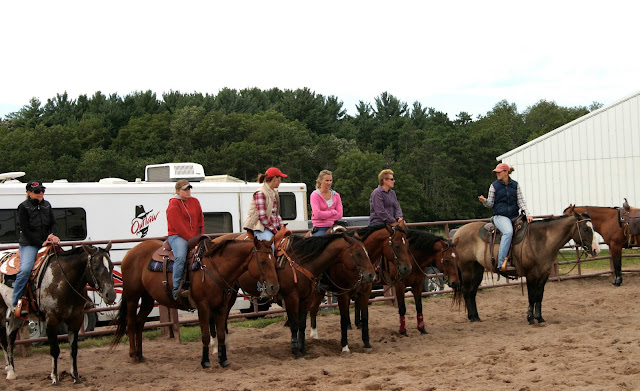 Although it was interesting and it is a very popular thing among stock horse as well as Arabian owners, it would most definitely not been up Ari's alley. He-of-lightness-and-sensitivity would not have enjoyed being kicked, nor would he have liked to have his mouth pulled hard to create a sliding stop. I took this photo at the end of the day. I saw a row of snoozing horses. It captures how hard they all worked during the day.

This leads to the end of the day, after we left Wisconsin and I had dropped Kristina off at her apartment. She lives in the neighborhood I left when I moved to the country nearly twenty years ago. It was right at the peak rush hour time, so I decided to spend sometime in the area. How much has changed and how firmly it was reenforced that you really cannot go home again.

Hip; urbane; crowded; upscale; pretentious; aggressive. The reality now. My quaint, quiet urban oasis is not what it used to be. I walked around like the rube I have become. I think my mouth literally was agape. I needed a few groceries, so I stopped in the place I used to shop. I could barely make my way through the aisles. Unfriendly hipsters, upscale soccer moms and a palpable sense of stress. No eye contact. Perhaps I was the only one no one would look at, as I am sure I not only obviously looked out of place, I probably smelled out of place as well! I was, after all, just a half an hour removed from the place in the photo.

It was a surprise to me that I would not want to live there again. I had thought I could, but I realize not so much.

Perhaps if I had practiced my look beforehand? Unlikely. I now realize I own it, so I may as well wear it with pride. I am a rube. ☺
Posted by Sandra at 3:21 PM 9 comments:

Since we last spoke it has turned into fall in the odd state of Minnesota. With the change of weather has come an impulse to return to the kitchen. As I had said before, I am a simple cook, interested in easy preparation and ultimate flavor. To that end I covered a cut-up chicken with fresh herbs, coarse salt, chopped garlic and green onions and a healthy dose of olive oil. 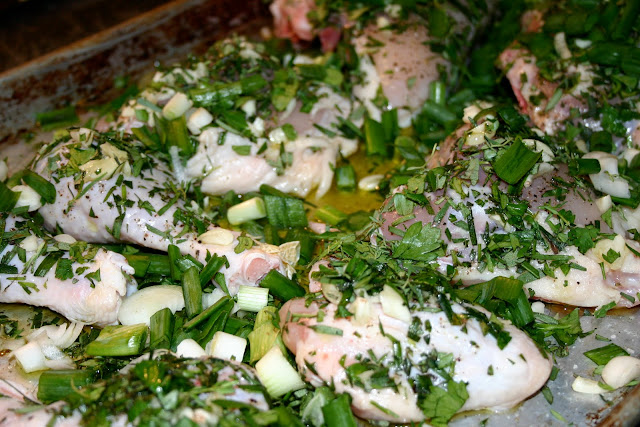 The end result was fabulous! 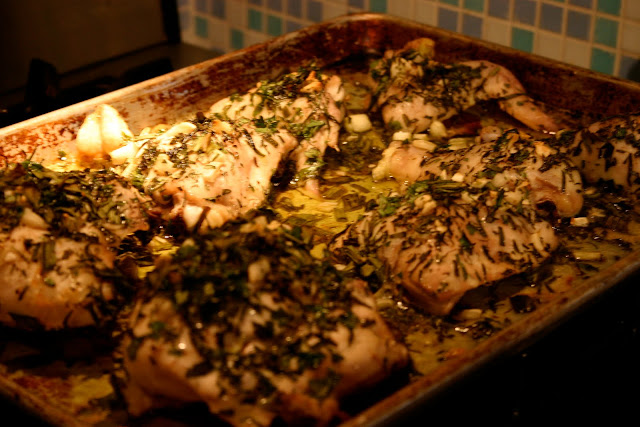 Paired with the zucchini pancakes ala Allegra........ 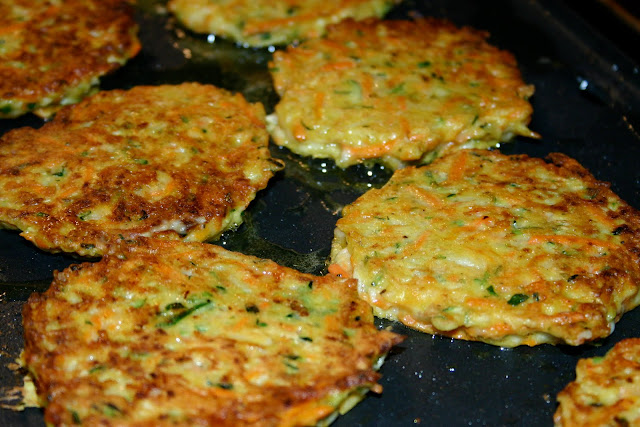 a simple and delicious dinner was had. 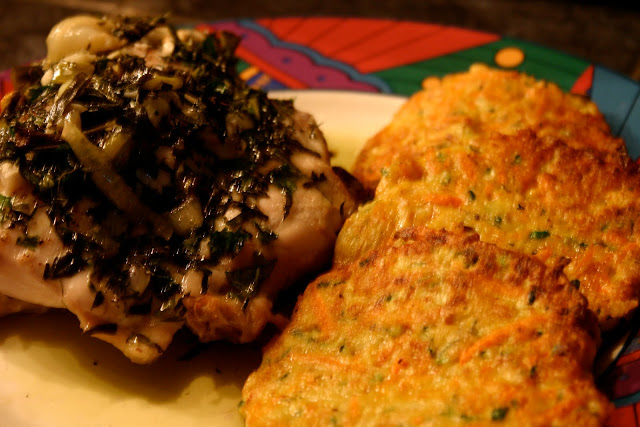 I watched Julie & Julia last night. I was almost inspired to pull out the cookbooks, but I think not. I don't have the time it takes, but it would be fun to cook like that again. On the other hand, my ever expanding waistline is not in need of that!

I know I have been MIA, not only from here, but I have not been out and about in the blogland. I have indulged my dour mood and stayed cocooned in grumpiness. Today is simply beautiful. Not even I can continue to chew the bone of discontent on a day like this. Perhaps the block I have had will be burst by sunshine and temperate fall days.
Posted by Sandra at 7:44 AM 9 comments: