Look at this closely. This is what insatiable greed looks like. Well-groomed, dressed in Seville Row suits and silk ties. They look human. But, if like me, you think limitless, unconscionable greed acting without regard for humankind defines evil, then these are also the faces of evil. This is how evil presents itself.  As an agreeable continence, but underneath is a psychosis which manifests itself in the form of an unquenchable need for more. 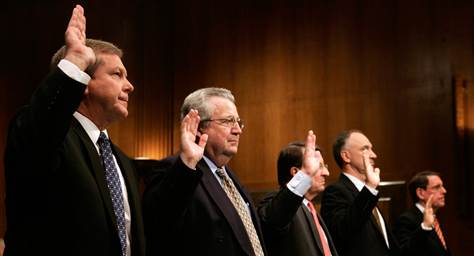 Dusted Off, But Damp

This is my view, which I have been looking at for one long month. Rain. More rain. And let's not forget, chilly. Except Tuesday, when it was 90 degrees F with a 72 dew point, and now it is 52 F. Just thought I would be my usual day brightener. 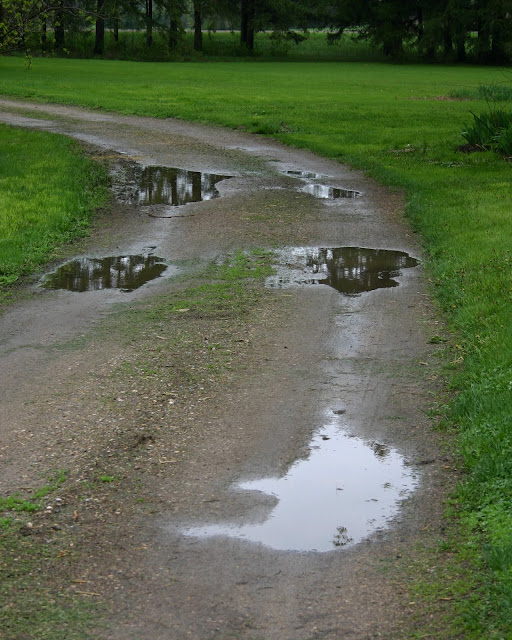 I have not been online for about a month, other than a little bit on Facebook. I needed a digital break and probably still do. I'm crabby. Ari just doesn't know what to make of it. 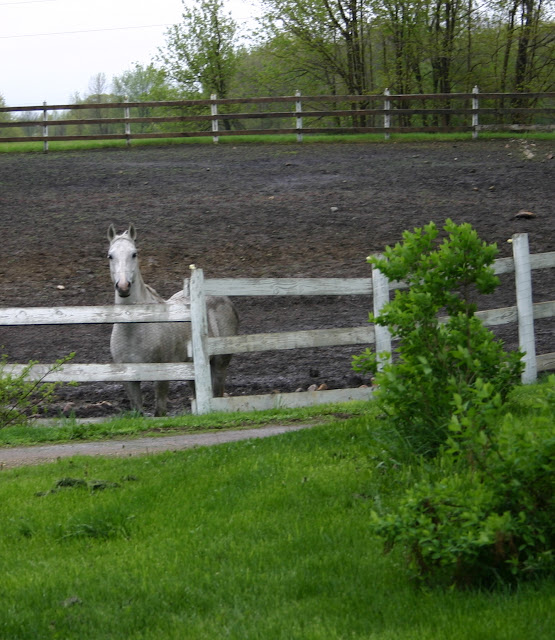 Bored geldings tired of standing in the mud. 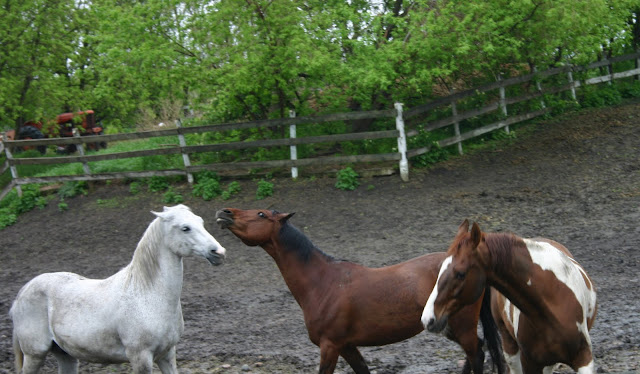 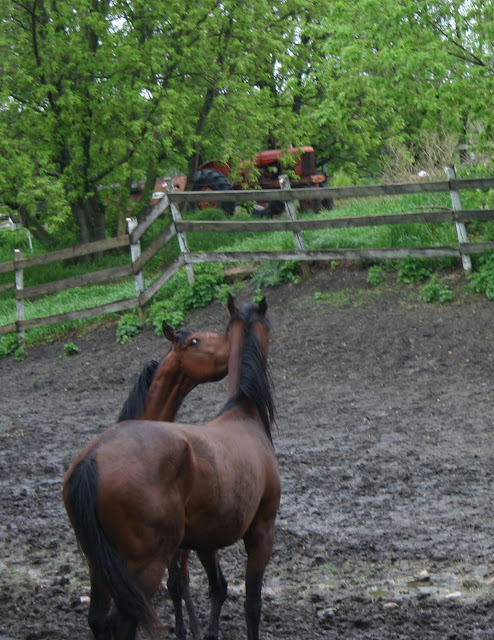 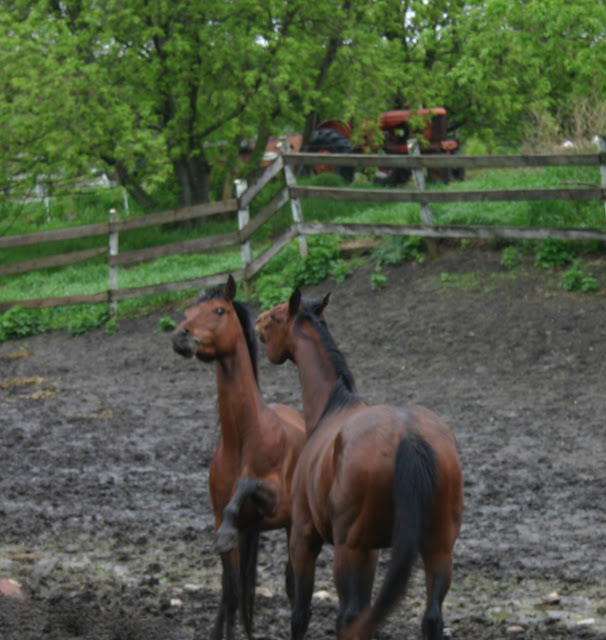 I'm planning to put in a rose border along the sidewalk to the back door, which really acts as the front door. It is too wet, too cold and too depressing to get them in the ground. 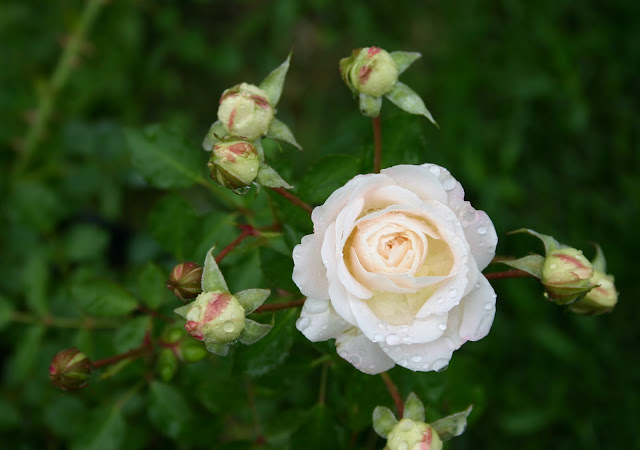 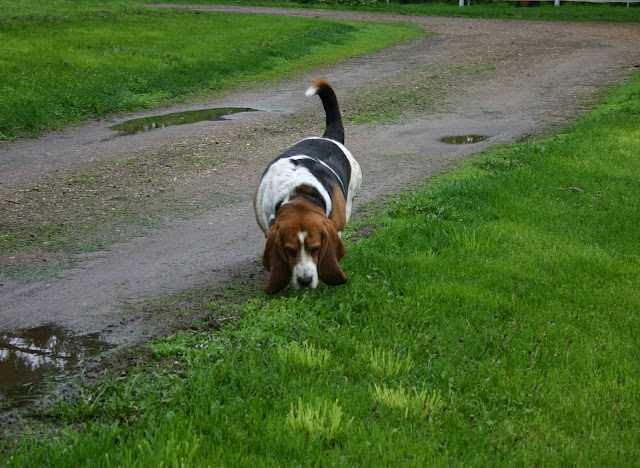 Rhododendron finally decided to bloom. Brave. Very brave. We had snow about ten days ago. 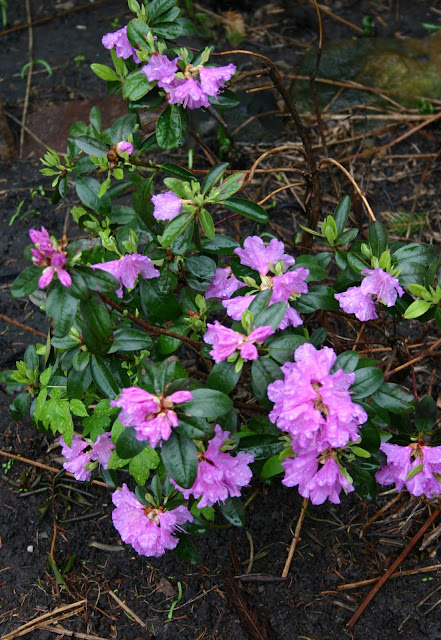 Are we done complaining now? I want a nap. 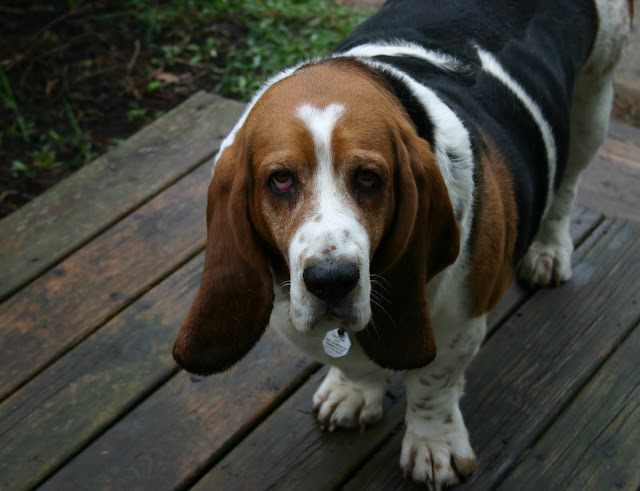 Okay, I'll crawl back into my hole now. Maybe I'll come out when spring comes, probably sometime in July.
Posted by Sandra at 12:39 PM 5 comments:

OK, after summarily offending and or making people uncomfortable yesterday, I will return to my weather whine.

I took this photo this morning, from the veranda because......you guessed it, it's RAINING! Still. I had a day where I was able to pull some weeds, but I have not been out to pick up the mess, because it won't stop raining. 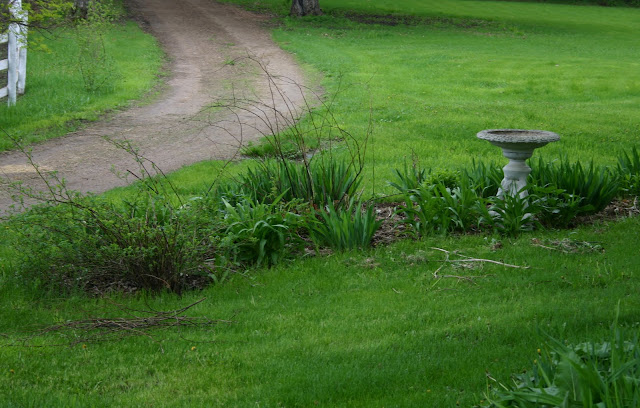 This is the same flower bed at this time last year, from the opposite direction. *sigh* 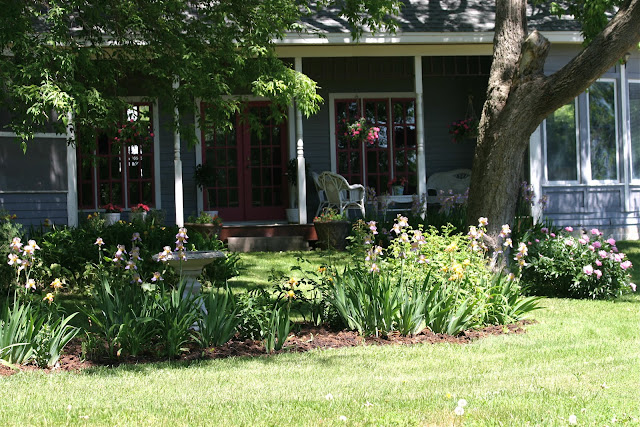 And just because I feel their pain, Sophie and Iris trying to eat their hay in peace. Mud, rain, what is a horse to do? 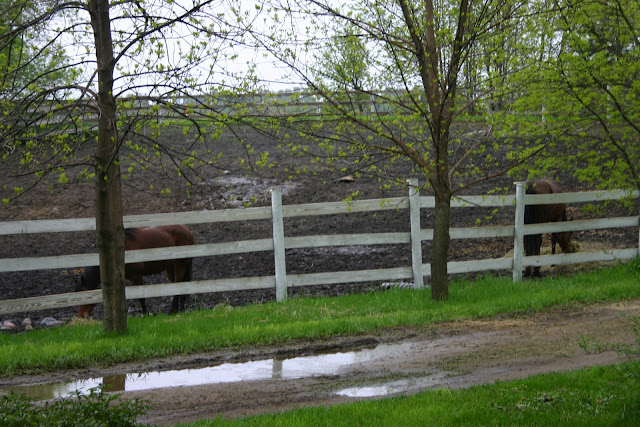 Until it dries up and we see the sun once again, I am probably not much good for anything but a long, wailing whine. Or opinions. Of which I have many and am always eager to share. Maybe I should find something to do. Or not. See you when the sun shines.
Posted by Sandra at 10:35 AM 2 comments:

Fan. I was and still am a fan of Freddie Mercury. His voice was amazing and his audacity was audacious. At the beginning of his career, the unabashed, here I am, what I am, of him was bold indeed.

I worked at a city hospital while I was in college. It was my first exposure to openly gay men, as the male working population there was about 90% homosexual. I was accustomed to looking at life from the outside of the circle, so they and I became natural friends. It was one of life's learning moments. The flagrant queens fulfilled everyone's stereotypical bias (and were endlessly fun and interesting), but many defied definition. My best friend was a conservative. I did not understand it, but there you are. In very short order, I saw people of various types, personalities and likability. I saw human beings, living their lives, just like anyone else.

My state of birth, the place I returned to after a small wandering about, has a Democratic governor and a very radical rightwing legislature. Said legislature is putting on the ballot an amendment to the state constitution banning same sex marriage. It is not enough that we have a law banning this, they need to make the grand spectacle of a constitutional amendment. The governor cannot block it.

I wonder about people who want laissez-faire governance where business and guns are concerned (they are also putting together a 'shoot on sight' law for intruders of property), but are so dogged in their need to control individual actions. Of course, they all cite their religious beliefs, which are not supposed to be the basis of law in the US, but which are increasingly creeping in.

I do not believe in the omnipotent being, nor of the son, but if I did I would have to wonder why such a being would create individuals which then its' followers are expected to revile. It screamingly lacks logic. I know logic and religion rarely shake hands, but come on. From what I have gleaned over the years, Jesus was more about inclusion than exclusion. Was on the side of the underdog, the disenfranchised. How did his followers stray so far from his ways? How can they remove an entire class of people from humanhood in the name of Jesus?

May 21st is supposed to be 'The Rapture'. What if it really happened? Wouldn't there be a whole lot of very surprised righteous. I would be left behind, according to the pious, so I would get the very big thrill of observing their well-deserved horror. Oh, yes indeed.

You know, you don't have to agree with a thing to tolerate it. If it is not harming us or the society then we should have no say in whether it is done or not. It is not my nor your life, nor our business. One can still shield oneself with religion and proclaim "I am not a bigot."

Which leads me back to Freddie Mercury. I think I would have liked him. I know I like his talent and how he lived his life was his business, not mine.