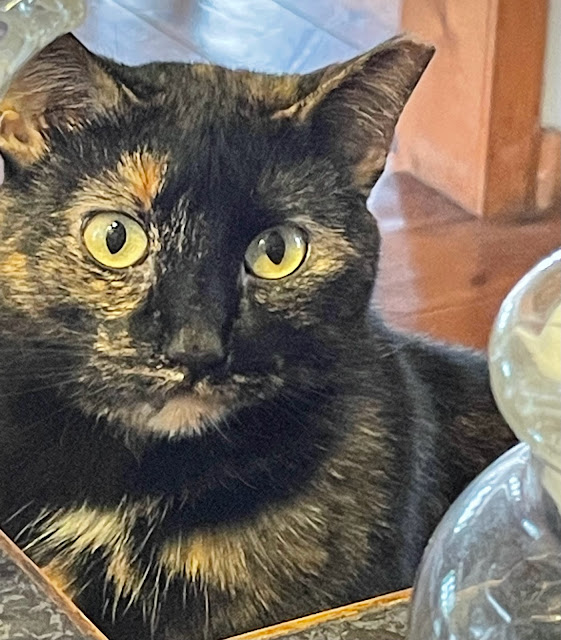 She absolutely loves her dog. 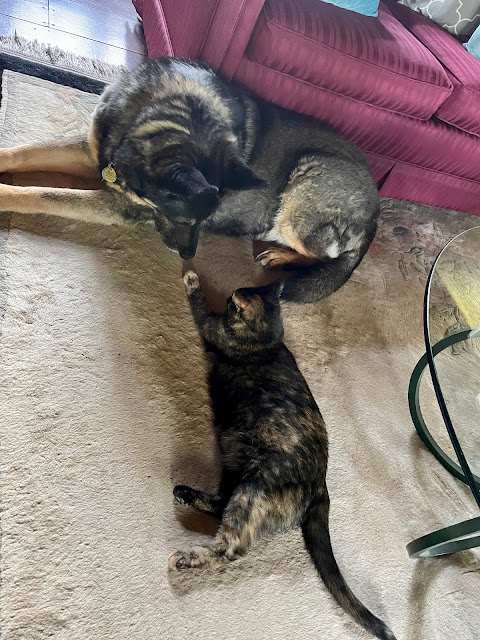 Keetah thinks Frieda is ok, too. They have very similar coats. 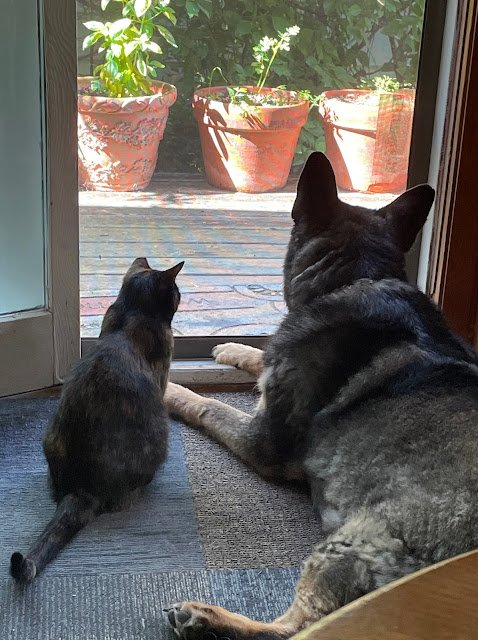 Frieda knocked on that door and walked in almost three years ago. She is a large personality and I wouldn't give her up for anything. I've been told torties are unusual and if she is any indication, yes they are! Keetah has been with us a little over two years. She came with her companion, Emma, who was sixteen at the time. Emma did live with us for six months before she went to the bridge. Frieda has filled the gaping hole Emma left for Keetah.

Keetah is still deaf and I don't think her hearing will return. She has adapted surprisingly well. The problem, which hasn't been too bad, is getting her attention outside. She has never been let out unattended. For the first year she was brought out on a leash, then we started letting her off and she was good. But she does have a chase instinct. She spent her life in a fenced yard. Emma adapted very quickly, but the intensity of a German Shepherd is a different story.

Mark had to go into town so he is bringing fried chicken home from the deli. No making dinner tonight for me. Yay.

Cats who walk in uninvited and make your home their home are always so special. Love those matching coats and the friendship they have. Another good frost here this morning, minus 1 Celsius, so that should kill off any weeds and bugs!!!

Nancy, she was a tiny kitten and did just that! Like it was a home made just for her. They are friends. That will kill the weeds and bugs for sure. I like winter, which is a good thing considering where I live. :)

My kids had a kitten who followed them home one day and we welcomed it into the house with our two dogs. The cat named Spot literally slept often on our dogs while they slept.

She would sit on any book we were reading to make sure we knew she was there.
Cats are pretty cool.

Every GS I've met have been high intensity dogs. Like having a Jack Russell in a large package!

Have a great day.

That's a great description, Val. They are intense. I grew up with them and Keetah was my mother's dog. They are unbelievable shedding machines!

Our tortoiseshell arrived one day to my husband's house, a small, wet kitten. She grew into a large tortie with a lot of attitude and now has arthritis in on of her shoulders. The vet is terrified of her so we don't bother taking her there anymore.

There is definitely something about them, Pixie. I've had a lot of cats but never one like her. They seem to know where the comfort is!

Nice to have a friend:)