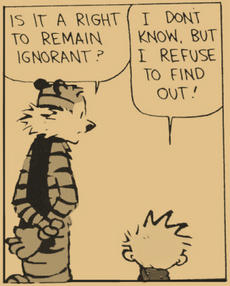 Willfully ignorant. Entirely different from being ignorant. One insists they are not ignorant in the face of overwhelming evidence to the contrary. The other isn't informed, so is ignorant of the facts. I don't believe there are any ignorant citizens to be found anymore. Unfortunately there are large numbers of the willful brand. If they have stayed in the camp up to now, they are never leaving it. Or so I believe.

DJT took the 5th today in regard to his shady business shenanigans in NYC. He said in 2018 that only the mob takes the 5th. If the shoe fits, buddy.

I don't know if there will be a reckoning. If there isn't I think we will be rolling up the carpet on these un-united states in the not too distant future.

I hear you! Nothing surprises me anymore. The information....as in truth.....is out there, but it's not easy to swallow. No matter what evidence is found, the Loyal T fans find dozens of reasons to claim it is false. I would love to be able to publish a page of recent quotes. Let's see how this plays out.

Yes, we need some hope. It's been greatly lacking for too long.

Hi Sandra, we haven't met, I hopped to you from Lori's blog. Then I scrolled down to read some earlier posts, and the procrastination!!! Years ago my Dad gave me a " Round Tuit" coloured orange, and the words were printed onto thin board. If there was a karate belt in that, I would have the top one for sure. Love your blog, your words and the news. I'll be keeping you on my list. Here in NZ, we have a cold snap, maybe not frigid by your levels, but will get down to zero Celsius tomorrow morning. Hope the pickles and pesto will be tasty later on. Fond greetings from Jean.

Hi, Nancy! Thanks for stopping by. I had to look up a Round Tuit. That's very funny! I need one. My husband had a fascination for NZ in the 80s. If he had an adventurous nature we would have moved there. I was game, but he is a cautious man. That is cold in your part of the world. I have to remember it's winter there.

DJT thrives on dis information as does his cronies and supporters.

It is frightening how they twist everything.

One last point. All of this attention to the 45th is what he actually craves...being in the spotlight is all he is after. He may use it for ill gotten gains?

I hope he spends time locked up somewhere.

All valid points, Val. But there is no way to bring him to justice without being in the spotlight at some point. It's important he has consequences.

That reminds me, I have to file that application for Danish citizenship before I become stateless and need asylum.

Yes!! Do it Monday. I may seek asylum.