Once Upon A Time In America, We Made Things

America's greatest strength, and its greatest weakness, is our belief in second chances, our belief that we can always start over, that things can be made better.
Anthony Walton 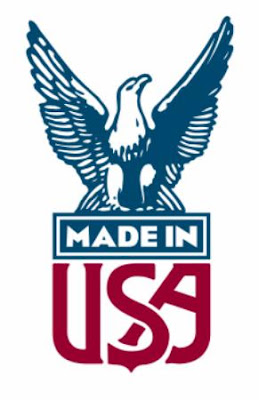 I know I periodically return to this topic, but it keeps slapping me upside the head. I used my KitchenAid mixer again today and I told Mark that it has been working in my kitchen since 1991. He jokingly said "made in America'. To which I replied, probably. And it is American Made. 18 years ago KitchenAid was still made here.
This morning I was watching the talk shows and on one of them the comment was made that 2/3's of our economy is driven by spending. I may have too much horse sense, but it would seem easy to figure out that you can't have a successful economy that is based almost entirely on purchasing goods produced elsewhere. That's a definition of a third world country. Ship raw material out and buy the goods that come back in. And then eventually you have what we now have. Unemployment and lowering of wages. Something then happens to that consumer-based economy as less people are able to consume. You'd think the 'best and the brightest' could figure that out, but perhaps the concept is too simple.
I wonder what will happen. I wonder if Congress will have the will, the chutzpah, to take this issue on. Probably not, but I would like to retain a glimmer of hope.
As I look at the image heading this blog, I wonder...... would we be a different nation if we did not have a flesh eating bird as our national symbol? I'll never know.
Posted by Sandra at 3:01 PM

My Dad has been harping on this for a long, long time. It is funny that the concept seems to simple for the 'big' brains of the current economists to 'get'. America got ahead of its game on this one. To be competitive, businesses "have" to go overseas for production. American consumers are not ethical shoppers they are bargain hunters. Demand creates the type of supply that happens. As you mentioned in a previous post, it is hard to choose local or ethically produced products anymore. But, in many ways it can be done, but that means paying a higher price and as Americans we are absolutely against that (unless it has a fashion designers tag:)
American consumers did not pay attention to the "Buy American" campaign that I remember from my late childhood because buying good quality at a cheap price seemed too difficult to pass up. The whole nation, in my opinion, needs to begin to be more responsible in this area from the business men to the consumers. We need to develop our spending identities based on what we own not how much we own : ) : ) : )

Oh well another two cents. My husband, by the way, works for a company that has businesses in almost every country you can think of. They have been in Brazil for over 70 years. Their business model has been successful in that this company is actually run by Brazilians. There are no American executives. The good paying jobs go to Brazilians. It exports all around the world, but 1/2 of its production is for local consumption. They helped create consumers here by opening this large business. They offer health care to the employees, the employees are unionized, and the plants meet FDA codes. This allows this company to be fully integrated into Brazil. Most of the production stays here in Brazil and the North American Production is still handled in North America (Mexico, Us and even in Canada : ) Like I said this company is huge . The problem in my mind is not so much opening businesses globally but how it is done. And of course American businesses and consumers need to focus on building our economy again. Buying locally, supporting small businesses is a huge part of that, but it is gonna cost more at the outset : )

The free-fall started with NAFTA. That's why I have so many items stamped Made in America. Much of what I have was purchased before NAFTA.

I don't know what will happen, but something needs to be done, we can't keep on this rush to the bottom.

Maybe we need the Brazilian model. : )