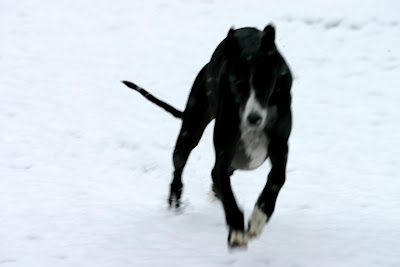 Gracie Greyhound ended up in intensive care last night. I awoke yesterday morning to a dog with the same symptoms as she had 4 months ago. Copious amounts of diarrhea and bile throughout the house and a dog in a depressed state. I made an appointment with a clinic and we were sent to a referral hospital. By the time all of this happened it was 6:00 PM and I had a dog on the edge. She started spurting blood in the lobby, so she was taken away for treatment.
When I saw the vet he told me she was as close to dead as she could be without being dead. She had reached a critical stage of dehydration which caused hemorrhaging. They were dosing her with massive amounts of fluid.
Now for the interesting part. It's the food. The vet told me they are seeing increasing incidents of digestive system failure in dogs, almost epidemic. I protested, saying I buy expensive, natural dog food. That seems to be the problem. We looked up the brand I use. No fillers, no corn, all good right? 15 different types of protein. He said you try eating 15 different proteins in one day and see what happens. They eat it everyday. There should be no more than 3-4 different proteins in their food. So we are killing them with kindness. I spend $55 for 30 lbs of food, no products from China in it, and I'm making my dog sick.  Many, many people are trying to do the right thing by their pets, so they go to a high-end food and you can basically be guaranteed it's going to be overloaded with proteins.
The good news is, if she survives the critical stage, she will be OK. Unless they find something else going on from the ultrasound. But, that withstanding, she will recover fine, but my dogs diet needs to change. He showed me online a brand he likes, it has 3 proteins. It's what she will be fed in the hospital and when she comes home.
The bad news is, this care is expensive, but she is a member of the family and I can do it, I just shouldn't.
I haven't had an update yet. She was in ultrasound when I called and the ICU tech was with her, so other than being told they gave her a bath and she was resting comfortably, I don't know anything else. We would miss Grace.
Posted by Sandra at 12:51 PM

It makes my head spin. We try to do the right thing. Cheap filler dog food is not good. Expensive multi-protein dog food is not good either! I started feeding the rat terrier a more expensive food than I have ever fed before starting a couple of weeks ago. You can bet I am going to check the label. How long have your dogs been eating that brand?

Howard has been on it since I got him, but I put gracie on it when she got sick the last time. But the other food I feed is also too many proteins. It's almost beyond comprehension, isn't it. It isn't the amount of protein, but the number of different proteins, and as he was going through the label with me, a lot of the items you can't say are actually proteins. It's mind-boggling!

I still don't know anything. I don't think I should be left on edge like this.

They are part of the family, but holy smoke! Mark said he didn't think we would spend this much on ourselves and I think he's right.

My prayers are with you and your beautiful dog.

I am so sorry that you guys are going through this with Gracie. Poor thing, our thoughts and prayers are with her and you guys! I had never heard of the dog food problem before, I am glad that I have a heads up about this. Hope all goes well.

Thank you all. The ultrasound showed Grace's intestines where bloated with fluid. Nothing was moving through and bacteria had developed and was killing the tissue. Large sections of intestine had died. As of yesterday her gut had started to move a bit and the vet is hopeful. She is feeling better and the diarrhea has stopped. She can't be fed until her gut is moving. Poor Gracie.

It sounds as if she is not out of the woods yet. Poor girl.

I continue to battle with a horse with peristant reocurring colic. I helped a boarder sell him last summer and he came back to me for boarding a little over 2 wks ago because the new owners were having trouble keeping weight on him. That was an understatement, since he is skeletal. He is an unreg Arab in his mid 20's. Was always an easy keeper. Owners do not have a lot of cash to put into him. And so it goes.....
So I am dipping into my bag of tricks trying anything and everything I can for the old guy.
Sorry to hijack your Gracie post.

So sorry to hear Grace is sick! Give her lots of hugs for me. You'll be in my thoughts!

She's still not out of the woods, but she ate a little today. She's sloughing off dead intestinal tissue, but the vet expects that to end in another day. Everyday she is just a little bit better. We would like to visit her, but I think it might make it worse for her.

Poor old horse. Do you think he was properly fed where he lived? I hope you come up with something that works for him Jean. You have a very large bag of tricks.

I am so pleased to hear Gracie's doing better. I kept checking back here yesterday [like a dork seeing as it would have been your night time] hoping for news. Here's hoping she continues to improve rapidly.

Thank you for the concern. It really is comforting.