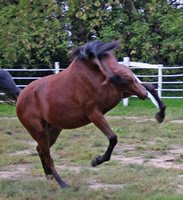 Never approach a bull from the front, a horse from the rear or a fool from any direction. ~ Cowboy saying
Four days of forced captivity. Now we are suddenly at 20 degrees and windy, up from -28 yesterday morning. Ah, Minnesota.
Four days of forced captivity  and windy.......not words you want together when you have to handle the 1000 pound beasts. Mark told me years ago he wished I had become involved in something safe, like mountain climbing. This was actually said while he was conscripted as breeding help, handling a mare who's not so sure she likes the idea is NOT for the faint of heart. But, that's not the problem today. Horses wound tighter than a clock and wind. Thanks a lot.
If I don't return you know that either: a. I'm in the hospital or: b. I'm in the morgue. If one or the other happen, all I can do is hope I took the culprit with me!
Posted by Sandra at 8:09 AM