*I fixed the link. : )
I got this tag from Just Jules
It seemed like an interesting tag, so here it is. You go to your fourth photo file and post the fourth photo in the file and explain it. It was a high percentage chance that mine would be of a horse! 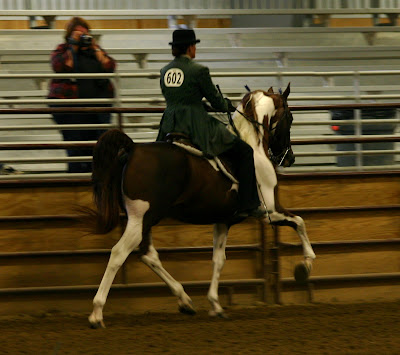 This isn't hard to explain. The American Saddlebred stallion, The Denver Mint, making his debut under saddle at the Fergus Falls Pinto show. Jean L.'s daughter Jaime is up and Jean is the person with the camera in the background.
'Solo' is a National Champion in halter, but he was never started under saddle until I got him as a 10 year-old horse. Jean and Jaime trained him and he finally made it to the ring at this show. He was on his way to winning this class when he kicked up a large clump of dirt against the wall and scared himself silly. Jaime stayed on, but it took too long to recover. It was a great ride though and I was so pleased to see him complete it. He has soundness issues, so it was the first and the last time.
Posted by Sandra at 7:01 AM