The Poetry Of Outrage

A year ago last week a house was moved down my street, in the wee hours of the night, which is when houses are moved. The wee hours is pertinent because what happened only happened because of the cover of darkness. Our house is flanked by 60 year old Norwegian Spruce on the west and south as a wind/dust/privacy screen. They are a huge part of the property's appeal. The trees to the south face the road.
The owner of the house being moved is an evangelical minister who has a congregation in the small town a couple of miles from my home. He hired a house mover, but he provided his own crew, members of his 'outreach' congregation. Men who found God through him and struggle to overcome their addictions. Vulnerable people.
They went along the road with chain saws and cut back and cut down trees. They took down 8 trees belonging to my neighbor, 3 of them large trees, none of which were close to the road. They butchered my trees, the spruce as well as a stand of slow-growing red cedar trees east of my driveway.  The cedars were not close to the road, it seems they were just there and a bunch of guys had chain saws.
I called the sheriff's office when I saw what happened. A long story, so I'll cut to the chase; the county attorney's office brought suit against the man on a felony property damage charge. I started the action and my neighbors joined in.
Several cancelled court appearances later and I get a letter that today there is a settlement hearing and my presence is not necessary. This is not my lawsuit, but a criminal case and I don't have anything to say about what happens.
Last night at 7:30 the victims coordinator called me and started the conversation with, the attorney working on the case has put a lot of time into this. I don't think so, since I made the case for them myself knowing that if I didn't it probably wouldn't be considered. I should have known what was coming. Charges have been reduced to a petty misdemeanor, public nuisance, with a slap on the wrist and any restitution would be at the misdemeanor level. She cited a MN statute providing for the right of a neighbor to trim back trees from the adjoining property if they are encroaching upon your property. Broadly interpreted, I'm told this statute applies because this house had a reasonable right to travel down the road unencumbered, allowing the willful destruction of personal property. The interpretation of this statue to apply to this situation is so ridiculous a first year law student could pick it apart. I, in my always calm manner, told her she was shoving this crap so far up my behind that it could see my tonsils. She hung up on me. I'm reading Frank McCourt at this time, so in my head were his Irish words, a little more colorful......you're shooving this so far up my fooking arse.......... I was rather loud and indignant, but I did not swear at the woman.
This is a direct result of the budget cuts in the state and the management of our state by our 'no taxes' governor. The state of MN has fallen into disrepair. I read an article a week ago about the cuts in the judicial system. The attorney handling this case was undoubtedly was told to wrap this up. I was told I could hire a lawyer and file a civil suit. Thanks.
So this is what we are left with and the man gets away with what he did. I see his vehicle drive by every day and now I can see him figuratively giving me the one finger salute each time he goes by. BTW, he has a reputation as a bad dude in the area. It seems just about everyone has a tale to tell about the minister. And he just got by with something else. 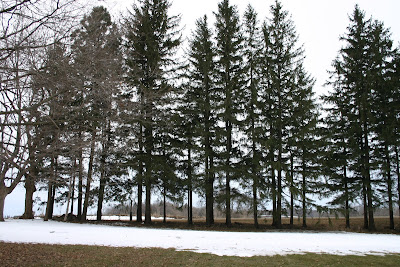 You could not see through the trees to the road before they sliced and diced. 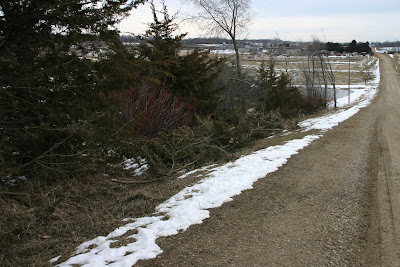 Red Cedar branches on the ground. 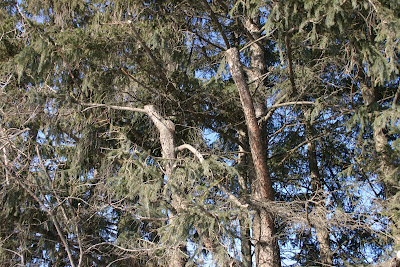 Branches cut back 20 feet up. They'll never come back. 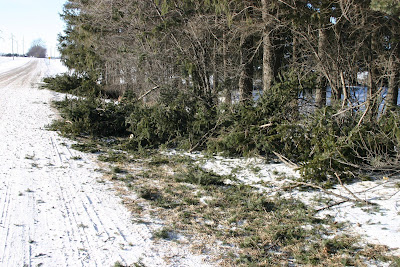 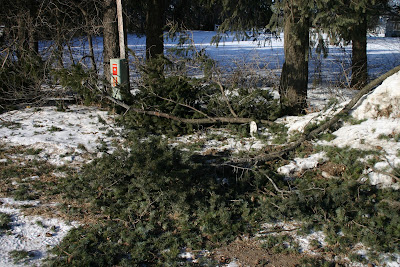 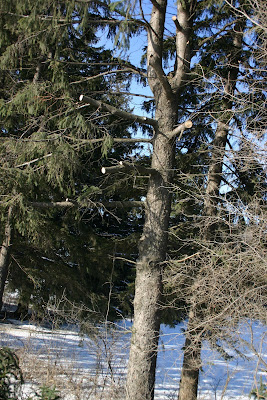 This tree was mutilated. It had beautiful, full cascading boughs. This is what is left. The minister pulled a permit in Nov. to move the house in Jan. He never asked us about the trees, which could have been tied back. He did what he wanted and he told me when I asked him about that it was done and there was nothing I could do about it. I guess he was right.
Posted by Sandra at 7:21 AM

I am so sorry this happened to you and your neighbors. It is too bad that this guy has ruined so many trees. I am surprised that he was not even apologetic. Well maybe surprised is to strong a worried I guess just perplexed. I would never think to touch a tree on someone else's property. I am also surprise that the law was not against him on this one.

This gentlemen needs to take responsibility and offer restitution without a court order. If I were you I would ask him to do this personally. If nothing else it would be interesting to hear his response.

We had many neighbors that did some pretty negligent and destructive stuff to my parents house and they often offered restitution. Of course lovely trees cannot be replaced and a garden trampled by unfenced cows cannot be replaced for what they were, but still.

Once again, sorry for your losses.

He's not a gentleman and he has no intention of taking responsibility. I talked to him directly twice and was told I could shove it. He could cut the trees if if wanted to and he wasn't ever going to pay any damages. He did offer to have the branches removed though.

I know this is a direct result of the budget cuts in the state. It was a felony until the governors address a week or so ago that said more cuts were coming, tax increases are not on the table. I know the attorney handling this had to get rid of it.

Do you ever notice how many of these so called "ministers" are the least God-like? They are some of the worst people I know!
While I am feeling really badly for your trees, because God help the person if he would've done that to ME - I am soooo laughing at your statement of shoving something so far up your backside that it can see your tonsils. Definitely a statement that I am packing away into the recesses of my brain to use later.

My *real* me would have used a few different words in that statement, but even in my outrage I thought I should display a certain amount of decorum.

My neighbor, who is part of this, told me he will get his in the end when he meets his maker. I told her I'd prefer to see him get it in the here-and-now. That way I KNOW he got his.

It would seem that the collar of God is a lovely hiding place for a lot of bad people.

Oh Sandra, I just fume about wilful destruction like this! Given how long it takes to grow a tree [some longer than a man's lifetime] he should never have been allowed to get away with this. I'm sorry, my friend, & unfortunately some of the nastiest people I know call themselves Christians.

It won't help but I have a funny for you. At a dinner table some woman commented to Evelyn Waugh something along the lines of, 'And you call yourself a Christian!' {It seems he was a very rude, arrogant man.] Waugh replied with dignity, 'Madam. Think how much worse I would be if I wasn't.'

I know it must hurt every time you have to go past your trees though.

I love the quote! All I could do was what I did. The rest has been out of my hands. We'll see if we will pursue this in civil court.

Destroying trees is an awful deed. I still have them, even though they aren't what they were. My neighbor does not, they took their trees down entirely.

I totally understand how you feel as I have not forgotten the destruction by the electric company of the beautiful trees on a street we lived on in Willmar, Minn, when I lived there FORTY years ago. They were going to trim some branches away from the lines but instead cut all the tops off horizontally! I wonder how the street looks today.

There is something wrong with people who can casually destroy trees.

Sandra
Watertown, Minnesota, United States
I moved to the western edge of Minneapolis from Saint Paul at 41, three horses in tow, not having the slightest clue where this would lead. It led to breeding and showing many fine horses over about twenty years. Those days are in the past, but I still have 15 horses hanging out, aging along with me. I started this blog in 2008 and like so many others I abandoned it about four years later. I think it was the Facebook Effect. After a couple of years of Covid isolation and three years of Facebook ignoring I decided to revisit my old relic of a blog, basically for my own sanity. It felt strange and empty at first but now it's just someplace to write whatever I want at the moment and to connect with a precious few people. If someone stumbles upon it, finds something amusing, interesting or, as is often the case, mundane in a not unpleasant way, I will be pleased.