*Update the update:  She got dumpy this afternoon and I had to give her fluids again. I may need to spend the $1000+ on an endoscopy or continue this ride.  Sometimes modern advances make things harder.*
*Photos of skinny greyhound added* 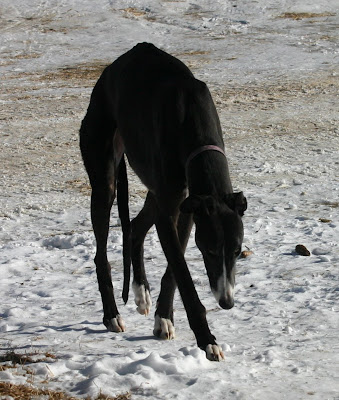 A dog is not "almost human" and I know of no greater insult to the canine race than to describe it as such. John Holmes 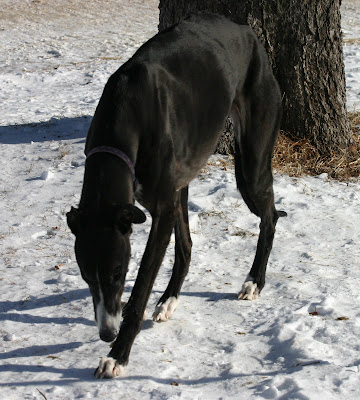 I thought I would give a greyhound update. I now know how bad it was and I'm very surprised she lived. I guess it is a testament to her strong will and body.
Grace became ill again on Sunday of last week, but made it through the night. I got her to the clinic Monday and she was once again severely dehydrated. I was shown how to administer fluids, so after she received fluids at the clinic it was up to me to do this over a couple of days at home. I'm happy to say she pulled out of it.
Grace has  inflammatory bowel disease which is caused by dietary hypersensitivity/food intolerance to excessive types of protein in the diet combined with genetic predisposition to dietary sensitivity. The treatment is a single protein food, with the protein being one she has not had before. She is eating venison with sweet potato. She's become very expensive to feed! She is also on multiple medications and will be for some time. One of those is prednisone for the intestinal inflammation and to suppress her immune system. She's on a high dose for 4 weeks and then on a low dose for 6 months or more.
She is feeling better since she started the prednisone and the venison diet. She gained a pound from Monday and her vet visit on Thursday. She's still an aggressive female that terrorizes Atlas and Howard, but I'm happy she is still with us. Although I sometimes do wonder why.
If you have dogs I would get them on a minimum protein diet, as you have no way of knowing if your dog is predisposed to food intolerance until it happens. You don't need to go directly to a single protein food, but a food with no more than 3 proteins is a good idea. I have my other two dogs on Royal Canin Sensible Choice Chicken & Rice. The trauma and expense of Gracie's disease isn't to be wished on anyone. It's far less expensive to start them on a different food than to deal with the effects if you have a dog that gets sick. Even if you don't treat the illness, you will suffer an emotional expense when you lose the pet to something that is preventable. I guess this is my new cause.
Posted by Sandra at 8:25 AM

Wow, Sandra, what a nightmare you have been through.

I'm very glad you have a diagnosis, cause and cure.

It is so much better to know, than not know!

Glad to hear she is on the mend!

Thanks. Did you freeze yesterday while the ponies had a pedicure?

Oh, and Gracie is the trooper, she was as near to death as she could be and she fought back. I'm actually not surprised!

Yes, I did freeze. I have a couple of spots that get frost bite pretty easily so they were the first to go.

I was outside for the time it took to trim two horses quickly (so about 20-25 minutes. When they turned down the street, I ran outside (I was waiting) and pulled them into the barn.

Ringo looks really good, Glenn came by and even commmented on how good he looks. He's not ballooning too badly on the roundbale 24-7. But it will be a trick to get him back into shape when I bring him back.

His hair is just wild! About 4 inches long! I miss him, but he's warm, he's happy and I can't complain.

I'm checking in a bit late on this post. How's she doing now? Isn't it hard trying to deal with an animal that can't tell you where it hurts? My baby boxer has terminal heart illness - and it's just a matter of time. Everytime he lays down, I have to check and make sure that he's still breathing. It's just hard....and I empathize with you and Gracie.

She has been fine since I gave her fluids on Sat. I don't think I can be hopeful, as she seems to slip at least once a week. All I can do is try.

It would be very hard to have a young dog like your boxer and know you are on a short line.

Poor Grace. Glad she is doing better again. Hope that the road smoothes for you two.

Okay, now I am updated on Grace.
It is a good skill to know how to administer fluids for dehydration.
I spent several hundred dollars having an emergency vet clinic do that for my previous cat.

It helps that Grace is very cooperative about her fluids.
Grace has been doing fine since she faltered on Sat.