It's a Dog and Cat World

Keetah has partial return of her hearing. It happened day before yesterday, all of a sudden her expression changed and she responded to my talking to her. It's been 5 months since she lost her hearing. Very strange. 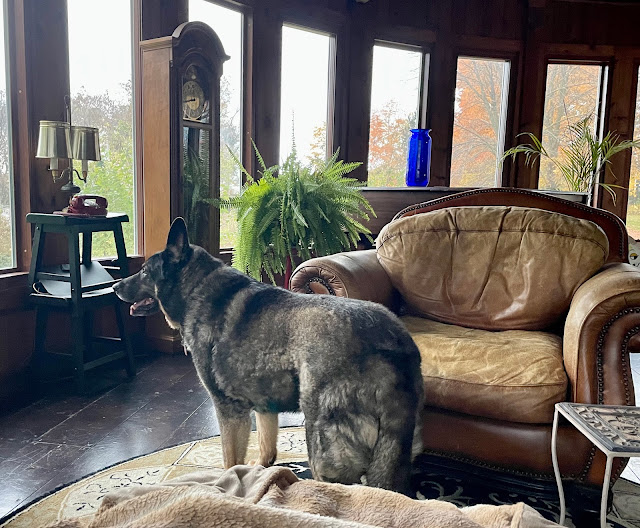 She has her eagle eye on Mark outside. She is quite attached to him. This is the first dog we've had that is "his". She looks good for a nearly eleven year old large dog. 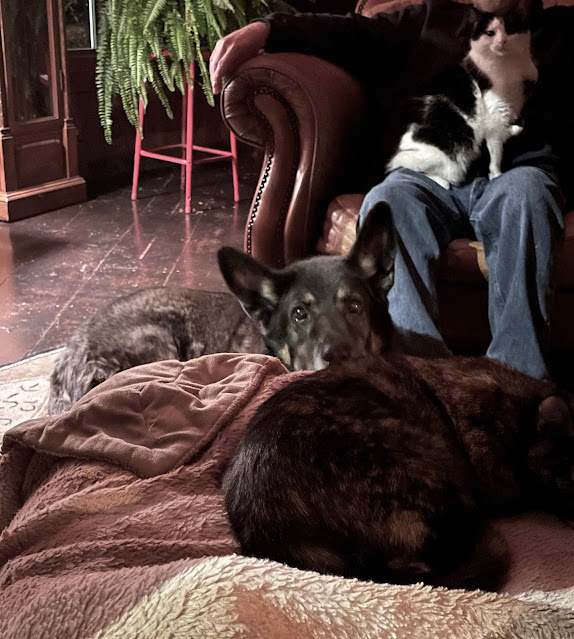 I think Keetah is lamenting being stuck in the middle again. Mark also has his very own cat, Miss Jiggs. She adores him and shows utter disdain for me. Frieda adores her comfy throw on the ottoman.

It's a cold sunshiney day. We are entering the long winter season and that's alright with me.

Great news about Keetah's hearing. Dogs are used to keen hearing and it must be very disorienting to them to lose it. Let's hope it keeps improving.

It's a mystery why she had sudden and profound hearing loss and now why she can suddenly hear. She seems to be relishing her regained hearing because she is constantly barking!

Yeah...there I am leaving comments in the wrong places. Oh well.

We had sleet again yesterday and today winds and brilliant sunshine.

I haven't had a pet cat since I was a kid. I do recall that they often have preferences to certain people.

Our Charlie prefers a warm lap or a snuggle and it rarely matters who!

Glad to read that Keetah’s hearing is back, even though it is still a mystery. All of the pets looked comfy and I wondered if your own favorite.

Good news about Keetah's hearing. I wonder what caused the change. And that chair....it would be hard for me to leave it.

Val, if you commented in the wrong place here I don't know about it!

I have always had cats, they are interesting little serial killers. Jiggs will have nothing to do with me and Frieda is an equal opportunity lover of comfort!

It's been cold here.

Keetah does look like a wolf. Of the many GSDs my mother had she is the most intense. She is also really social and good natured. Her wolf-like appearance does make people a bit leery of her at first.

Life does evolve around their comfort, Beatrice! Keetah was my mother's dog. We've had here 2.5 years but have known her since 2013 when Kate got her. She is a really nice dog who attache quickly to Mark. She likes me and I like her, but she loves Mark. Frieda showed up on the farm as a tiny kitten. She came to the kitchen door and basically knocked to come in. And that was that, she wanted a home and I got the most unusual cat I have known, so I would say she's my baby.

Lori, Keetah went to the vet with an ear infection and came home deaf. She was in very high anxiety when she was there. I don't know what happened but it seems her stress level had something to do with it. She had an infection in one ear but became totally deaf. Just like that, he could hear? I have no idea.

The only seating in that room are two of those chairs and Frieda's ottoman. I have named them the thrones, because that's what they look like! My chair also really helps my back. That small room is my favorite.

So happy she got her hearing back, I hope it stays! I suspect she had more than an ear infection...but you never know and obviously your Vet didn't either:(

Far Side, it will remain a mystery. She is enjoying barking at every little sound, real and imagined!