I Saw the Light

Frieda was sitting on her piano, the upright sitting position, in profile. She has a pretty profile. I saw the lovely light and the lovely kitty and decided to take a photograph. I messed around with the framing of it too long, when I finally got around to taking that photo, Frieda had left the picture. No tortoiseshell but the light is pretty. The rocking horse belonged to my son, my husband at the time knew someone who made them. I am fond of it. 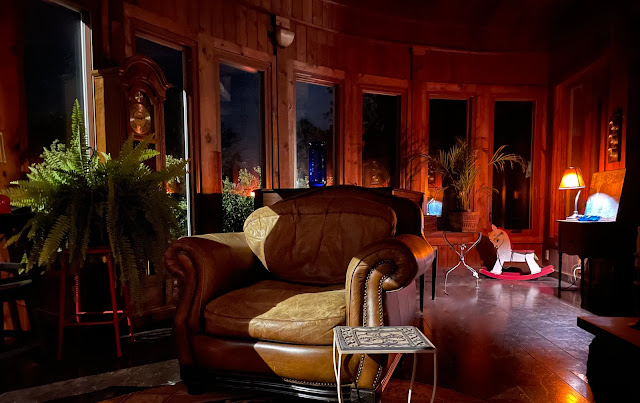 Former Neighbor Jack didn't make it out here yesterday. Which worked out well for Mark. Hay Guy came with two loads that he and Mark had to unload. It was just before Jack was supposed to arrive when Ken pulled in with the hay. Mark was relieved when Jack called to say he couldn't make it. We need about 400 more square bales for the season and 40 round bales. It's been a dry year, hay is scarce. I need to buy a lottery ticket.
Today I will pick the remainder of the tomatoes. We are coming into normal temperatures for Minnesota in October, so this will be the end. I have enough tomatoes preserved to last a couple of years. I'm going to make salsa verde with whatever green tomatoes I pick. Anything ripe will likely be dehydrated. Thanks Val!
As a note of interest mainly for myself, my sinus problem and the knockout punch it gave me has lessened by a lot. It takes being really ill to appreciate feeling well!
I guess it's off to the tasks, I have a list, one or two will be done. Ah, well.
Posted by Sandra at 9:56 AM

I'm hearing all over about the scarcity therefore high price of hay this year, from people with animals to feed. It's a problem just finding it then a second mortgage to pay for it.

I love the photos of your house in this post and the last post as well. Hope you get all the hay you need. How many horses do you have now?

Boud, it's bad. The high price of hay and propane are giving me heartburn. I imagine kill buyers are busy.

Thanks Pixie. The light with the lamp shade cast a soft glow. This is my favorite place in the house in the winter.

I have 14 horses. They are very old to getting old.

Hope you find the hay you need. I hear it is expensive. Such a pretty place to sit and read a book! The Drs are calling that sinus thing a virus up here and you just have to get through it1 Sudafed really helped me:)

Far Side, 2 more loads were brought today. I'm getting close on the sq bales.

I've had chronic sinus problems most of my life. This was different, it was awful, so I can believe it's a virus. That is my favorite room this time of year. Light the fire and feel cocooned.

I love the light in your photo. What a beautiful room. Last weekend I got 50 bales of second cutting for $5.25 delivered and they even helped stack it. The deal of the century and I have more coming this weekend. Need about 200 more and we should be good. Gary is pulling out our tomato plants...we are done. Glad that your sinus problem has lessened....feel better!

What a beautiful photo and room. I think this room is as big as my cottage!

We were lucky this year on hay and the crops did really well, the rains came just at the right times for most of the crops. It as been a bit dry now for the past two weeks.
I got all of our winter hay in August and our LP delivery last week. We should be good until spring.

Hope your sinuses clear up. I know hubby has been struggling with his sinusitis.

Lori, we got 2 more racks yesterday. I need to add all the bales and double check what we had last year and let Bob know how many more square bales we need. It's a good feeling when the barn has hay for the winter.

The lamp shade puts the warm glow in the room.

Val, the room isn't as large as it looks in the photo. It's the width of the house but it's narrow. A perfect winter cozy room.

I have a full tank of propane but unfortunately it doesn't take me through the winter. Ah, well.

I am feeling better. Now I'm trying to slog through the German Shepherd hair!