We have stayed in contact with our immediate neighbor from Saint Paul these almost thirty years. Mark has continued to do his taxes. He drives out here twice a year and it's such a pleasure to see him, even though he is a dyed-in-the-wool trumper. We work at avoiding that topic. We like him and he likes us, so we just push that difference to the side. Which is easy when you see one another about two hours a year.

Lately, I need something to prod me into action. Jack's coming today is the prod. He and his wife, Carolyn, always knew me as an organized person with a clean house. HA!!! I don't want to shock Jack's system. Carolyn told me one time that my house looked like no one lived in it. I'm afraid that kind of organization is no longer in the cards, and that is a good thing. I am not such a tight-ass anymore.

I need company more often. The house could be crumbling around us and Mark wouldn't notice. That man spends a lot of his time somewhere else, even when he's standing right in front of me. I never have to worry about a nagging husband, so it's not really a complaint, just a wonder how two people can be so opposite. In our case it works well. I can't be told what to do and he doesn't care what I do as long as he eats!

Onto another story: Mark just brought in the herbs I'm going to, once again, try to overwinter. The sage and rosemary did make it last year. The sage look bedraggled, it needs some water and also, I gave it a very short haircut a week or so ago. 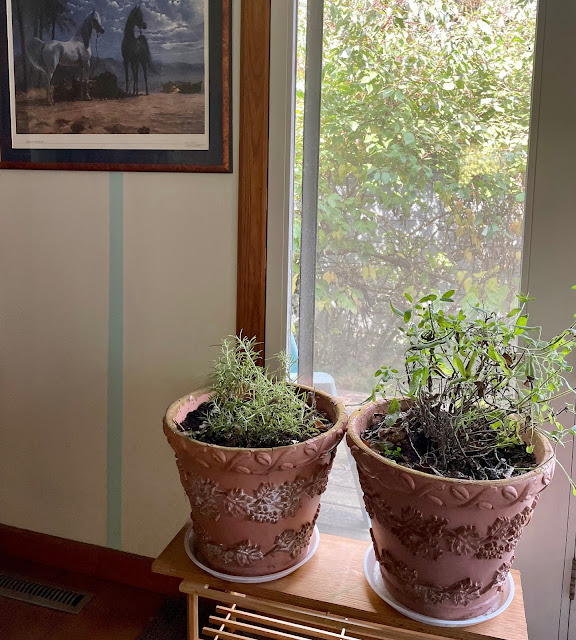 The ferns got huge. When I bought them in June the fronds didn't cover the pot. One will hang in front of the kitchen window and one will sit on a tall stool in the sunroom. I just gave them a drink. 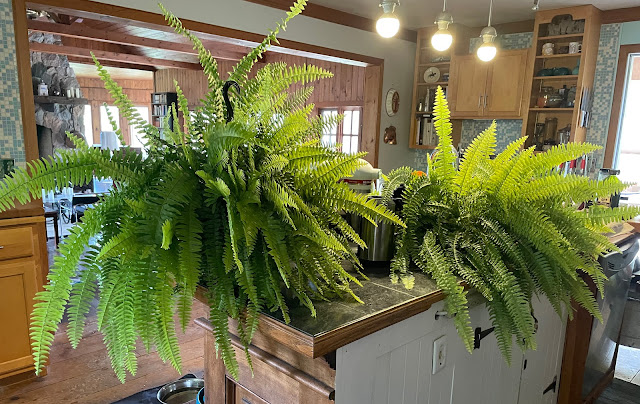 I have never had luck with basil over the winter, but I'll try again. I haven't brought parsley in but I'm thinking it will do fine. 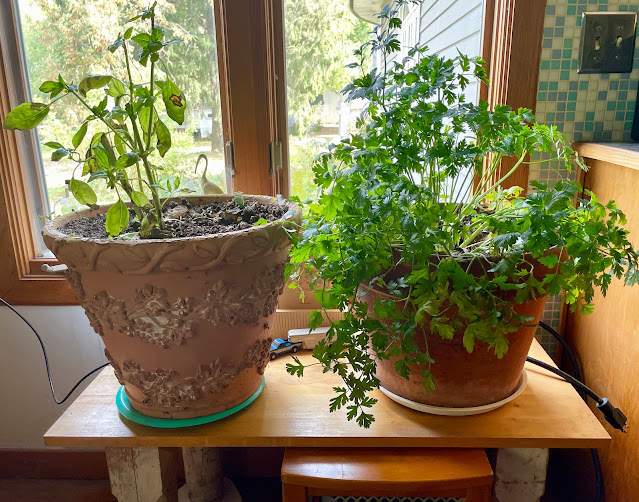 So, this is my grand excitement. I'm doing some house cleaning, crowding the kitchen with plants, general mayhem. After tomorrow it gets cold. It's near 80 today! I may need to break down and start the furnace on Wednesday.
Happy trails.
Posted by Sandra at 1:50 PM

Boston ferns get huge. I've had them ,divided them, given them, they're unstoppable. One of their descendants is hanging across the street in a neighbor's porch . I'm wondering where she'll house it when she brings it in.

HA! The kitchen window faces east and is a tall double casement. It's suddenly dark in the kitchen, it's covered half the window, length and width. I have to rethink the one in the sunroom, it's too big for where I put it. These were on my front porch. Wednesday will be a high of 50 F so I thought I should get them in. Maybe your neighbor will give it back you you. :)

My ferns did very well this summer too. They must be at least 6 or 7 years old and I just can't part with them. No high temperatures here. In the 50s and very raw feeling. We also have some friends who are T fans, and it was nice to see them a couple weeks ago when they were on their way back to Ohio. Find it very difficult to understand why they continue to support him....to each his own I guess. I would love to take a tour of your house.

Your flower pots are so pretty and unique.

Lori, after Wednesday our temps go back to normal. It's been a stretch of unseasonably warm weather. I can't believe how huge the ferns got in such a short time. They were tiny. My house needs me to tour it with a vacuum and duster!

Thanks, Kaye! They are old.

Such petty ferns! After so many years working in the greenhouse we don't allow plants inside anymore...even cut flowers cause us to get a cold and sneeze...so flowers and plants stay outside:)

That's too bad, but I can see that happening. I like some green over the winter. But I'm always ready to put it back outside in the spring. They are pretty ferns!