As promised. The son sent me a photo of Homey in his bad dude outfit. He dotes on his Homer. He told me Homer was enjoying the trails so much he almost forgot to ask for biscuits! Matthew found Homer as a stray. He was walking along the creek in his neighborhood and this little dog was walking along with him. He was a little thin but not too scruffy. Matthew called me saying he didn't know what to do. I told him you cannot leave the dog, take him home. See if he is chipped and put him on lost dog sites. They did. They also put up found dog signs in the area. No one claimed him, Matthew kept him. That was maybe five years ago. My son dresses his dog up. 🤷 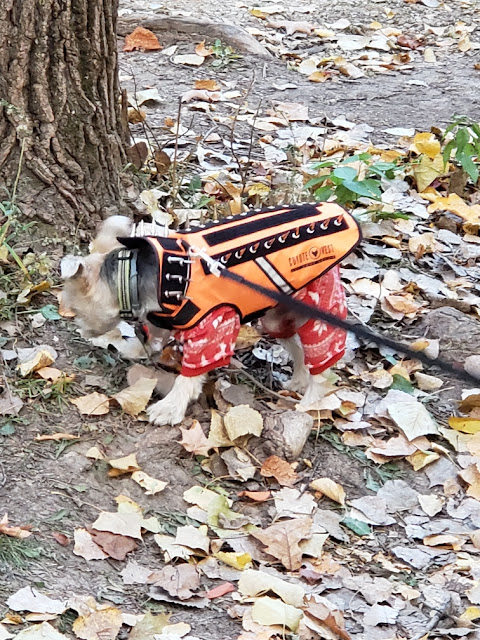 Then yesterday afternoon this happened. Bill's nephew and cousin live down the road to the east of us. His nephew has an excavating business (he buries my horses) and also takes down trees. So does Bill's cousin, take down trees. Junior said he'd fell these two dead trees and showed up yesterday afternoon. It was a family affair, Bill's brother, their cousin and their nephew. No one told Bill because he wouldn't be able to stop himself from getting in the thick of it and he shouldn't. He's going to be annoyed.
This tree was of particular concern. It was close to the house and part of it was over the house. Junior said there wasn't much holding it up. We live in a softwood forest, we are constantly dealing with trees, the ever sprouting saplings and the ever dying mature trees. There's no shortage of firewood.
I was inside , it seemed the best place for me to be. I took video through a porch screen and a window. The boxelder bugs are thick right now. Another effect of living in a softwood forest is much of it is boxelder trees. Ergot...boxelder bugs. My grandma had them at her house, she called them elder bugs.
Projected task of the day is to trim the bushes along the round end of the house. I let them grow too much, they are covering half the windows. I'll see if I hold up. It may be a two day job. It's going to be in the mid 70s today. Mark plans to cut up the trees as much as he can. Junior said he'd do what Mark can't, but I think Bill is going to want to get into that. They have big guns chainsaws. Guys.
Posted by Sandra at 9:42 AM

I forgot to acknowledge the tiny armor plated bad dude! And I love your son for equipping him.

Boys with toys indeed! One of those boys is out there with his chainsaw right now. The tree just keep giving!

He loves his Homer. ❤️

Sweet pup! You must feel a lot better having those trees down, and I hope you were successful in the trimming of your bushes. Gorgeous weather here....in the 60s. Thanks for sending it.

Homer is an adorable boy, Lori. I didn’t get them trimmed. Keetah gets very anxious if we are both outside and she is in the house. She’s become unreliable outside without a leash. It started when she saw a jogger on the road with a dog. Now she can’t be trusted. Since Mark was out cutting up the pine tree I stayed in with her. We have more nice weather to send your way!

How wonderful that your son rescued Homer!! Looks like he is ready for Halloween too!

Far Side, the son adores his dog. It's funny, he's over 6' and a large bodied guy with a Yorkie he dresses up! They should take Homer out on Halloween in his spikes.