How different children looked in the 1950s. Can you imagine seeing a little girl like this now? No. Photos of children are excellent in showing societal and fashion change from era to era. This is my cousin, Marie. She was eleven years older than I was and one constant in my life. I was perhaps three? Marie looked like her dad, nothing like my mother's family. Marie died from a rare condition I no longer remember the name of. That was in 2012, two years after my father died. I still miss her. 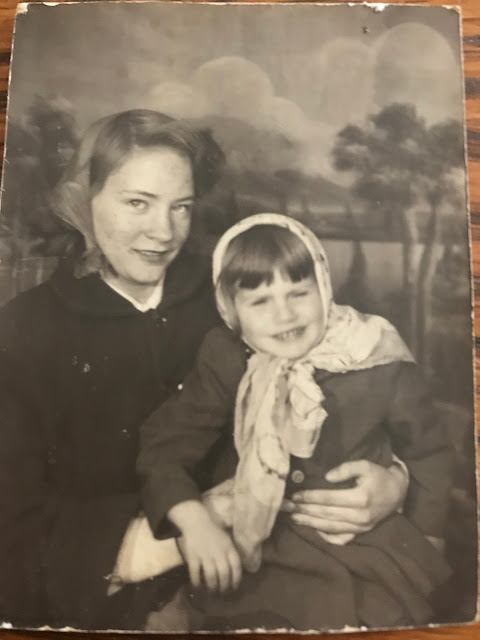 Another relic. This radio was in the basement rec room for as long as I can remember. 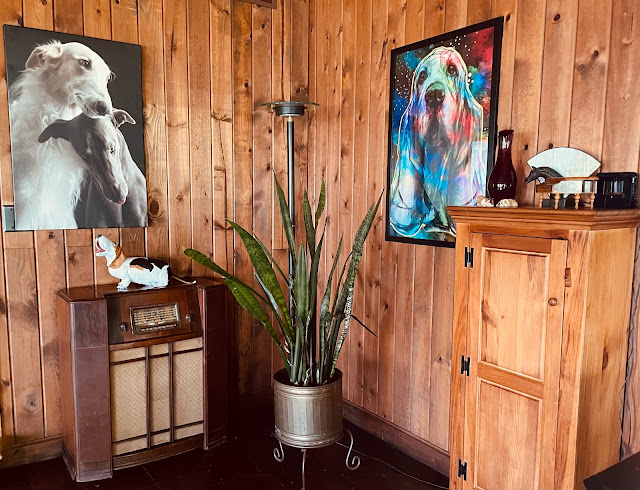 My memory is that it was my dad's. Perhaps he got it after WWII. He spent the entirety of the war in the Navy and was discharged after the war ended. It used to work during my childhood. I brought it home and cleaned it up in 2020. It does not work now!
The basset on top of the radio was a kind, thoughtful gift from a friend who is a gourd artist. Who knew such a thing existed? My much adored Howard died in 2017 and I was devastated. Barbara took a photo from facebook and made a gourd Howard for me. I call the print on the right Psychedelic Howard. He would not be amused.
I have a quieter than usual day ahead. Mark has gone to Stillwater, which is on the eastern edge of Minnesota along the St. Croix River. On the other side of the river is Wisconsin. His sister lives there and family is getting together. A brother living in Nebraska is in town. It will be a long day for him.
So I'm home with a deaf German Shepherd who has decided her calling in life is barking and two cats, one who doesn't think I deserve to live here, the other is on the fence. It's a toss up as to whether I do something or plant myself in the throne chair and listen to a new book all day. I'm cutting myself a break by calling it even chances, we all probably know that's not true!
While sitting here at my desk I have decided what's for dinner this evening, so one thing accomplished. I never know where inspiration will appear, it usually comes from seemingly nowhere, why would a quiche pop in my brain from what I wrote in this post? I'm not going to try to figure that one out.
Posted by Sandra at 10:43 AM

I expect you read about quiches recently...

I notice in old photos how much older young girls used to look. Maybe the clothes, or the hairstyles, they all look like their mothers' age.

I thought about that after I wrote this. I wonder who wrote about a quiche? :) I think I'll leave out the crust. That may be called an egg bake.

Ahhh! This weekend I didn't have to cook! Well, other than some meat for hubby.

We had a radio like that in our summer cottage and it did work, but sounded scratchy. We ended up putting a more modern radio on top of it and using it as a stand.
I love the painting and photos of the dogs in this room. How gorgeous!

My nephew married a gifted artist so I am hiring her to do a portrait of Fred my hubby's 37 yr old mule.

I try never to think of supper...LOL.

I want to see that painting when she's done.

I am a crazy dog lady with cats! I love all dogs but was particularly fond of sight hounds and scent hounds.Dogs and horses dominate my walls.

Did you enjoy your vegetarian weekend?

I did and I am trying to get a good shot of the painting she did of Sundance she did for us as a gift! I'll post it in the next blog adventure as I took them riding in the forest!

A gourd artist?! Wonderful though.

Liz, I know! She does amazing things with gourds.