These two are fast friends. They are Frieda and Keetah, so perhaps that was the start of their connection. They also have matching coats. Frieda rubs on Keetah often, there is no threat emanating from this big girl. Keetah did live with a cat before coming to live with us. Murphy, the cat, went to live with my son and has helped their very nervous cat calm down. 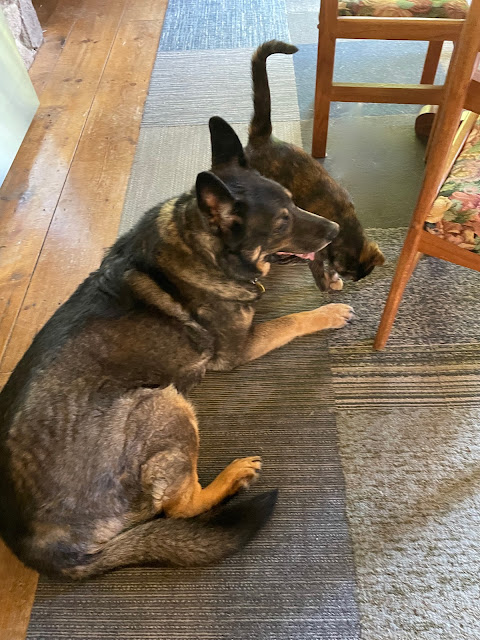 I got the bread making thing rolling again after a week of store bread. It was a high of 52F degrees yesterday, which helped prompt me. I tend to slack off on bread making over the summer. Somehow heating an oven doesn't have the same feeling for me when it's godawful hot and humid. Mark got happy when he saw the loaf cooling. He's so easily pleased! 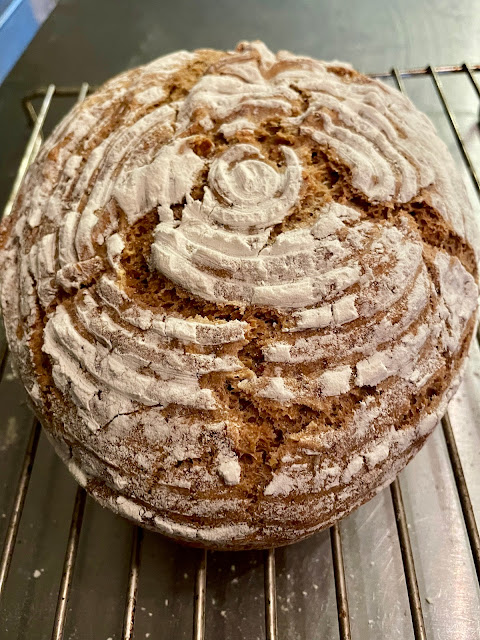 Speaking of Mark, he spent all of yesterday and will do the same today, lopping saplings along the pasture fencing. We've always had to control the woodlands desire to spread but we have noticed a marked difference over the past eight-to-ten years. It's almost uncontrollable. Softwood trees like our warmer, more humid weather.   It's a lot of work for him.
The geldings got their first two hours on pasture yesterday. I have to let them get accustomed to grass, I cannot do it as gradually as is advised because there are too many of them, but I give it three days, increasing the time on grass by an hour per day. If there were fewer of them or if I had much more pasture land they could just be left on pasture and get used to it gradually, but I don't so they can't. When they are settled I will start the process with the mares. My stallion gets to do it the easy way, as he has a pasture to himself which is large enough his grazing won't affect the grass growth. It was much more work when I had up to forty horses here! Yes, I was not sane.
It's 49F degrees and cloudy, not springlike at all, unless we are talking Minnesota spring. Which we are, so never mind. I lit a fire last evening and will again tonight. I don't want to run the furnace. Which as I write this I hear it, so, yah.
I think I'm going to make soup for lunch. We have a crusty bread, it's chilly outside and Mark will have spent a morning working outside. Sounds like a good plan.
Ciao, bella
Posted by Sandra at 10:50 AM

It is nice to have pets! WE miss having a dog:)

After my last dog died in 2018 I couldn't face having another. I also knew it was very likely I would get my mother's dogs, at least Keetah. I did end up with both, Emma died 8 months later from old age. Keetah is a really good dog. No more dogs for you?

We have Grand dogs who really help fill the gap and my brothers dog. Dog people with no dog are pitiful! With my husbands precarious health it would not be fair to get a dog.

You ended up in spam again Far Side. I completely understand not getting another dog, even though you miss having one.

I didn't know you had to get Horses used to Pasture, well, there's so much about Horses and other Livestock that I don't know. *LOL* I find it fascinating, I've been Reading Blogs of people who have Chickens since I've mused about getting some. But, I know nothing of Chicken Raising and being responsible for any Living Thing is such a huge undertaking, isn't it? I decided so long as I can buy Eggs, the Chickens would be better off being Raised by someone who is a Chicken Whisperer. I think at one time whoever owned our property might have had a Horse or Cow, since they kept so much just Pasture with no other Plantings like the other Mini Farms around us. I just noticed those with a lot of Pasture, have grass eating Livestock. I think perhaps this size we have could sustain mebbe a single Horse, or Cow, or Goat...or, whatever else I will never have. *Ha ha ha* People ask me why I bought a Mini Farm if I wasn't gonna Farm? I said, becoz it keeps me furthest away from whoever lives around me than regular Residential Properties here in the City... sounds rational to me? *Winks*

Dawn, if horses are on grazing land at the beginning of spring they generally do just fine. I let the grass grow longer before I put them out so I need to acclimate them to a certain point. Horses can founder or have a grass colic if introduced to lush pasture too quickly in the spring. I used to take care of a neighbors chickens, lambs and alpacas when they traveled. I was happy when they moved!